While barriers still remain, more women are entering truck driving careers than ever before.

In October, the number of women employed in the truck transportation industry reached 1.6 million, bringing their share of the trucking industry workforce to an all-time high of nearly 18%, most of which are in truck driving roles. This is the highest number of women in the industry since the U.S. Bureau of Labor Statistics (BLS) started tracking the numbers in 1990. 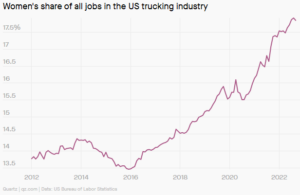 The trucking industry is currently short around 80,000 drivers, which is an all-time high, according to an October report from the American Trucking Association. Women are helping to fill these gaps in a still male-dominated industry.

There are many reasons why more women are shifting gears to a career in professional truck driving. The industry is beginning to see high numbers of women fleeing burnout conditions created in certain sectors such as healthcare.

“So, a few years ago, I would have said it was women coming in from service jobs,” said Ellen Voie, president of the Women in Trucking Association. “But just in the past year, more and more women have come in from the healthcare industry, whether it’s nursing homes or hospitals. It’s just unbelievable.”

The solitary nature of the job is also attracting new workers to the role. “A lot of people formerly were doing some sort of customer service and [decided] they just can’t deal with the public anymore,” said Desiree Wood, president of Real Women in Trucking, an advocacy group for women truckers. She goes on to say that many women today see truck driving as a good alternative to other jobs that don’t require a college degree.

While it’s not for everyone, the ability to travel on the job is a perk to many. Some drivers have been known to park their trucks at a rest stop and grab an Uber to go explore the area.

Will the Trend of Women Starting Driving Careers Last?

Connie August, a truck driver who started her career in 2008 thinks so. She notes that changes, while slow, are being made in the industry. Showers and bathrooms are cleaner, and she notes that highway patrol officers will often check in with her when she’s parked.

“From when I started to now, I have to say the whole trucking industry atmosphere has gotten much more agreeable—a lot better for women truckers,” said August. “Etiquette on the road has gotten better. People in the workplace have treated lady truckers with more respect.”

Wood, who became a truck driver after her kids grew up agrees. She notes that she’s seeing more women in their 20s entering the field. “These young girls are a lot more outspoken than these older women that were kind of like, ‘Oh, don’t rock the boat’,” said Wood, who is 58 and no longer a truck driver.

She goes on to say that she also suspects there’s a certain cool factor to being a woman in the field. “I mean, if you’re a woman truck driver,” she said, “you’re badass.”