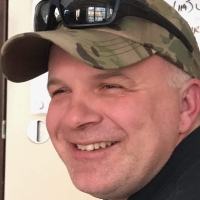 James “Neil” Chandler from Anniston, AL has been named a Highway Angel by the Truckload Carriers Association (TCA) for his assistance in an early morning, head-on collision.

Chandler was heading south on Interstate 65 near Cave City, KY at around 5:30AM when he encountered an accident on the dark highway.

“A quick fog came up,” he said, “then everyone slammed on their brakes.”

He pulled over along with several other trucks and called 911. Without giving it a second thought, he sprung into action to see how he could help the occupants of the two cars that had collided.

After spending 16 years in the Army and Navy, Chandler’s military training kicked in and he got to work on the scene. In the first car, he found a female driver and her two teenage children. All three appeared to have sustained some injuries and wanted to exit the vehicle. Evaluating the scene, he knew the mother was pinned in the car and would likely need to be cut out, so he did his best to keep them calm.

Upon checking the other car, he discovered the entire driver’s side of the vehicle was destroyed and that driver didn’t make it.

“I hate that I couldn’t do anything,” Chandler said. Prioritizing those he could help, he went back to the vehicle with the mother and children where he stayed, keeping them calm, until emergency vehicles arrived.