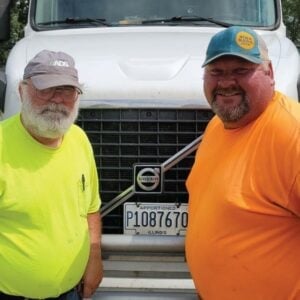 The Truckload Carriers Association (TCA) has named truck drivers Randy Sweet and Mark Carey, both from Oelwein, Iowa, Highway Angels for helping a critically injured man who had a tractor fall on him.

Sweet and Carey, who drive for Advanced Drainage Systems out of Hilliard, Ohio, were at a job site in Bella, Iowa when they found a man who had been pinned under a tractor for four hours.

“He had the full weight of the tractor fall on him,” said Carey. “He was in shock and he was chilled.”

The man’s wife had just left the scene to get help, but Sweet and Carey called 911 and worked together to help the injured man. Carey has medical training and relayed the man’s vitals to emergency personnel. Though the injured man wanted to be moved, Carey urged him to stay still concerned that he could cause more extensive physical damage.

“His leg was pretty bad,” said Sweet. “It was all tore up and he was in a lot of pain—we were trying to keep him comfortable.”

According to Sweet, the man was conscious, but had a lot of open wounds. While Sweet continued to keep the man calm, Carey ran to the entrance to flag down the ambulance as it arrived.

After arriving at the hospital, it was discovered that the man had a broken hip and he spent a week in the hospital recuperating.