2022 has certainly been a wild year at the pump, but in the thick of the holiday season, we’re finally seeing prices trending down, a trend that experts expect to continue into the new year.

According to information obtained from AAA, the average price per gallon of diesel in the U.S. on Friday was $4.80 per gallon. This is down nearly 20 cents from the previous week and down 55 cents from last month’s average.

There are a few factors contributing to the decline of these historically high prices, including a drop in Brent crude oil prices, decreases in wholesale and retail margins, and increased refinery output.

“Right now, we find street prices for diesel at extremely hefty margins to wholesale costs, but those should come down to where diesel largely moves for less than $4.25/gal at retail with considerably lower numbers available to fleets that buy on cost-plus basis,” Kloza said.

The U.S. Energy Information Administration released a chart on December 6th which forecasts a decline in diesel prices for 2023. The EIA chart also considers ongoing global factors such as the EU’s ban on seaborn imports of petroleum products from Russia which, according to the organization, “creates supply and price uncertainty for distillate markets in early 2023.”

The report goes on to say that “a slight contraction in the U.S. economy and refinery maximization of distillate fuel production will reduce distillate prices” in the first half of 2023. EIA expects U.S. diesel refining margins to fall by 19% in 2023 compared with 2022. 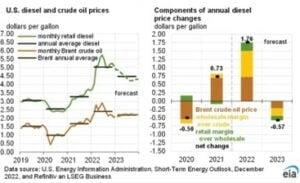 Patrick De Haan, head of petroleum analysis at Gas Buddy, predicts a continued decline in prices due to an expected, “noticeable improvement in supply and high refinery runs.”

“For now I think there’s plenty of room for diesel prices to keep declining. How long that extends into 2023 is a bit uncertain, but for now I’d say there’s a drop of roughly 40 to 80 cents per gallon still coming,” De Haan said.