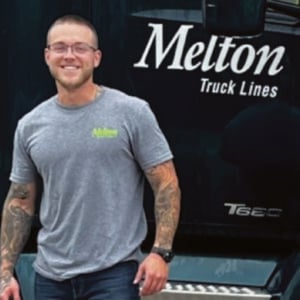 The Truckload Carriers Association (TCA) has named truck driver Eric Weed, from Oklahoma City, Oklahoma, a Highway Angel for coming to the aid of his trainer, Scott, who was having a severe allergic reaction to coconut while the two were on a training trip.  Weed drives for Melton Truck Lines in Tulsa, Oklahoma.

Back in October, Weed was training with Melton Truck Lines. While at a restaurant in Orlando, Florida, his trainer, Scott, somehow ingested coconut, to which he has a severe allergy.

“He just starts sweating bad and starts turning purple and blue,” Weed said. “He started shaking and said, ‘I think I was exposed to coconut.’”

While Scott typically carries an Epi-pen for such occasions, in this instance he had left it in his backpack back in his hotel room.

With this knowledge, Weed quickly ordered a rideshare to get them back to the hotel while Scott became progressively more ill.

“He was still sweating like crazy—I was ready to call 911,” Weed said, but Scott insisted he would be OK once they got the Epi-Pen.

Once the pair arrived at the hotel, Weed dashed to Scott’s room and quickly retrieved the Epi-Pen. Scott’s condition began to improve after getting the shot from the allergy-counteracting pen.

“I got him some water and hung out and watched him for two hours until he was good,” Weed said. “I’m glad I was there and glad it all worked out.”

Scott made a full recovery, and the two were able to continue training. Scott, however, believes that Weed’s quick response helped save him from a worse fate such as a more severe situation or even a life-threatening event.